Can virtual reality trick your brain? Even if yes, why should we do it? A brain is an incredible tool capable of learning, adapting and coping with everyday challenges. But usually, first you need experience a challenge to be able to learn from it and adapt. And, of course, the first attempts are also not usually successful, right? So how can we challenge ourselves and so facilitate your skills, flexibility, and the capability to habituate to recurring stressful situations you encounter? Well, we can use some tricks and at MindBox VR, we made a little research and experiment.

Most everyday challenges stem from social interactions – giving a speech in a public or media, present a product, negotiate an important contract and so on. Actually, anxiety, fear, and worries related to such social stressors are the most prevalent in our modern society. Given these facts, we were interested whether it would be possible to trick our brain to respond adaptively and learn how to cope with such situations using virtual reality. Our idea was to take some of the well-established psychotherapeutic and coaching methods (e.g., systematic exposure, desensitization, training) and use them in the virtual environment to facilitate social skills and performance. What was the setup?

41 healthy young adults aged between 19 to 33 years participated in the study with average age 21,8 years. The experiment was attended by 13 males and 28 females.

The individuals were randomly divided into either control condition (15 participants) or a social challenge (26 participants) in virtual reality. Prior to any VR exposition, participants of the both groups completed three self-reporting measures in order to evaluate their degree of trait anxiety (i.e., an individual tendency to respond anxiously in stress or difficult situations), fear of negative evaluation (individual tendency worry about others’ evaluations and overestimate their impact), and state anxiety (the current intensity of self-perceived anxiety). Thereafter, the participants entered into virtual reality simulation while their heart rate was monitored and recorder. This physiological measure was used as an objective index of arousal and degree of challenge.

Firstly, participants were provided 5 minutes to familiarize with the virtual environment and functionality. Next, they were comfortably seated and asked to relax for approximately 12 minutes. During this period a relaxing virtual simulation was projected. This treatment was introduced to let the participants’ arousal recover to the baseline level (the last 4 minutes of the relaxing period was used to estimate participants’ baseline heart rate).

After the relaxation, the individuals in challenge group was introduced into a simulated medium-sized virtual lecture hall filled with virtual audience. 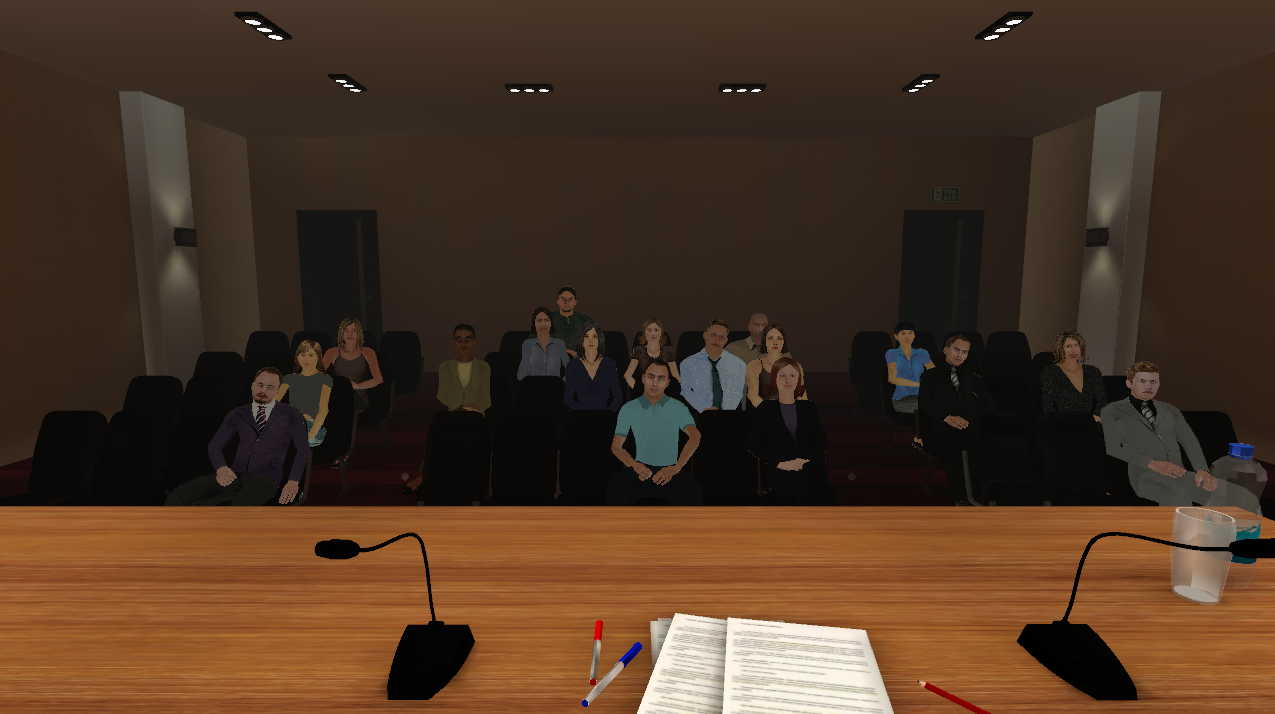 Briefly, after the simulation started, the participants were required to:

The guided structured questions took approximately 8 minutes. This period was split into two 4-minute intervals that were evaluated separately.

The conditions in control group were kept as similar to the stress group as possible, with exception of the actual VR simulation. Instead of the interview in front of the virtual audience, participants in the control group were asked to provide their subjective feeling about a set of virtual scenes on using a simple scale. Indeed, this condition was much less ego-involving and evaluative.

Interestingly, although both groups were equal in their levels of trait anxiety and fear of negative evaluation and although both groups felt equally anxious prior the stimulation, their physiological response to the virtual reality experience was substantially different! First of all, the heart rate – our measure of psychophysiological arousal – was the same at the end of the relaxation. However, when put into either the control or challenging simulation, their course of physiological arousal started to diverge. The individuals who gave an interview in front of the virtual audience responded with a sharp increase in physiological arousal, suggesting they were more challenged and perhaps stressed, which remained increased also in the second half of the interview. On the other hand, the group of participants which rated the virtual scenes responded only a mild physiological activation, which disappeared later on. With this results, virtual reality training focused on interpersonal communication and presentation can be more effective than ever. 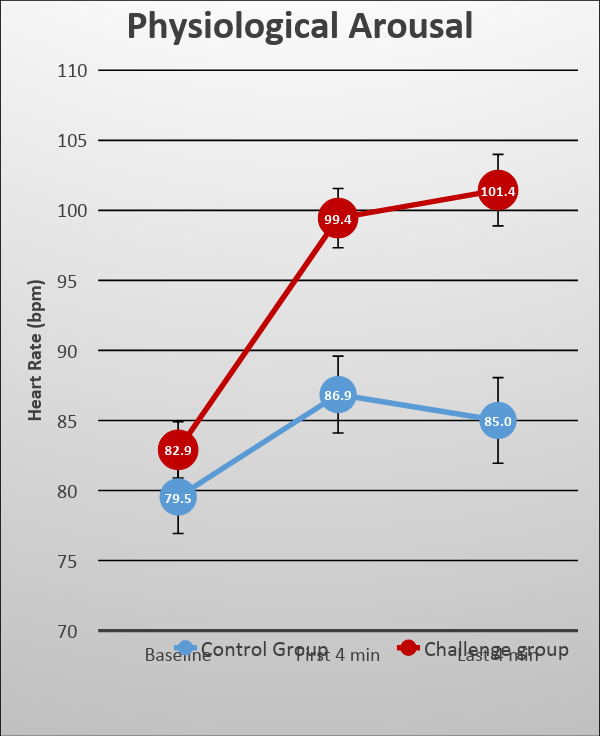 What do these findings demonstrate and how to use them? Well, first, the findings suggest that performing in VR can mimic the real world challenges, which is neccessary for virtual reality training. But this is really important! By such exposures, we provide our brain with the possibility to adapt and habituate to such situations. When systematic, this virtual reality training can be used to desensitize our fears, concerns, and anxiety related to social challenges and hence improve our social skills and work performance without the actual experience of a failure or insecurity.

The experiment was implemented in collaboration with Department of Behavioural Neuroscience from Centre of Experimental Medicine of the Slovak Academy of Sciences and Faculty of Arts from Comenius University in Bratislava.

Want to join the discussion?
Feel free to contribute!

This site uses Akismet to reduce spam. Learn how your comment data is processed.